A historic photo of Vesper during its heyday.

Settlement began in the Vesper area, located seven miles west of Lincoln and a half mile south of Highway 18, in 1869. The current Vesper town site was named Nemo when it was founded in 1887. “ Old Vesper” was a community located two miles west of Nemo. The post office was founded there in 1873. The town site of Nemo was vacated in 1894. “Old Vesper” w as moved to this location and was platted into lots in 1905. The Union Pacific ran through the new town site.

The Vesper Presbyterian Church was organized September 3, 1876 by Dr. Timothy Hill and Rev. H.C. Bradbury two miles west of Vesper in an old school building until a new church was built in Vesper in 1901. Services were held in the church until January 6, 2008. The building was purchased by Linda Wrench, and is available for tours and community events. 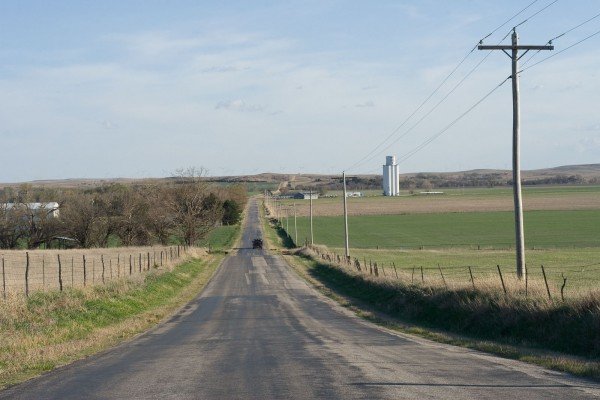 A southern looking view of Vesper today with the prominent Farmway Coop grain elevator on the far right. (Photo by Kris Heinze)

The Union Pacific Railroad passed through Vesper at one time, creating a thriving community, with their own business district.

The community built a consolidated school in 1914, where classes were held until it closed in 1966. Vesper is now part of the USD 299 Sylvan-Lucas School District.

A tightly knit community, the Vesper Community Club is active in the area, and holds Bingo once each month in the gym of the old Vesper High School. The high school’s gym has been remodeled and is host to live entertainment, wedding receptions, reunions, and private parties.

Permanent link to this article: https://www.livelincolncounty.com/vesper/

Each year individuals and households accumulate many personal financial and health documents which require secure disposal to prevent Identity Theft. The Bank of Tescott is hosting FREE Shred Events to dispose of the general public’s personal documents at NO CHARGE in our Lincoln and Lindsborg communities. Please help us get the word out to your …
May
15
Sat
9:00 am Golf Tournament – 2 Person Scramble @ Lincoln Golf Course
Golf Tournament – 2 Person Scramble @ Lincoln Golf Course
May 15 @ 9:00 am – 3:00 pm

All hands on deck for an ocean adventure as we learn about Jonah and his mission. We invite children that have finished Pre-School through 7th grade (extended due to jumping ship last year) to join us for VBS week of JUNE 7-11, 2021, 9:00-12:00 BEVERLY COMMUNITY CHURCH, 200 AGNES, BEVERLY KS as we fish for …
View Calendar