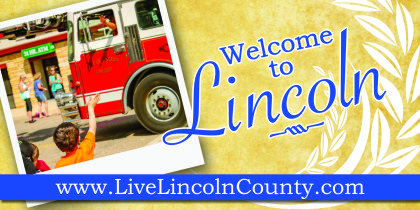 Lincoln’s business district is primarily located along Lincoln Avenue, and includes many of the city’s original native limestone buildings, but is also spread along Highways 14 and 18 that intersect the city.

A variety store, a clothing store, and a full-line grocery are just a few of the local retail establishments in town.

For those interested in the arts and humanities, Lincoln is home to three museums, one of the most well respected art centers in all of Kansas, and a first-run movie theater renovated and operated completely by volunteers.

Lincoln’s Carnegie Library was built in 1913 and is one of about two dozen in the state still functioning in its original purpose. In 2009, the Library doubled its space, building the addition in matching native limestone, while modernizing the interior.

Lincoln’s schools are often honored by the State of Kansas for Excellence in Education. Their Lincoln Leopards are competitive academically, musically, and athletically with schools of similar size throughout the state.

Historic buildings abound in Lincoln, including the Marshall-Yohe House, built in 1875, the Lincoln County Courthouse, and the Cummins Block Building which is home to the Post Rock Scout Museum and the Crispin Drug Store Museum.

Lincoln offers many of the conveniences of the city with the feel of a traditional rural American small town.

For information on local government, utilities, and services, please visit the city’s website at www.lincolnks.org.