The Evangelical Lutheran School is located on the east edge of Sylvan Grove, directly north of the Bethlehem Lutheran Church. The two-and-a-half-story building reflects the Prairie School style of architecture and is constructed of native limestone, a common material in this area during the late 19th and early 20th centuries.

The school is associated with the early German Lutheran immigrants who settled in this area. The 1913 school, designed by Salina architect C.A. Smith, replaced an earlier building at the same location. The parochial school operated every year except one between 1913 and 1981.

See the nomination for this historic limestone building, and others in Lincoln County on the Kansas State Historical Society website. 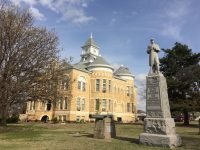 The current Lincoln County Courthouse was constructed after the original 1873 stone building, built by Myron D. Green, was completely destroyed by fire on the……

Built in 1914, The Lincoln Carnegie Library is one of 59 libraries built in Kansas by philanthropist Andrew Carnegie. Today, it is just one of……