When Lincoln County Hospital opened 65 years ago, it was the support from county residents for essential medical services closer to home that made it all possible.

And as the hospital celebrates more than six decades of caring for Lincoln County residents, nothing has changed as locals are still championing efforts to have a state-of-the-art medical facility in their community.

Last week, hospital officials hosted an open house to unveil recent improvements to the facility’s radiology suite, including a new digital imaging system, and to celebrate its 65th anniversary.

Steve Granzow, who serves as chief executive officer of Lincoln County Hospital, said the radiology department updates not only improved the aesthetics, but enhanced the level of care the facility provides.

“The new radiography equipment allows us to capture images using less radiation,” Granzow said. “This is a safety benefit for our patients; We are reducing their lifetime radiation exposure. The new equipment and the remodeled suite also allows us to move the equipment, rather than the patient, when we do imaging studies. The table and other pieces of equipment can be raised or lowered and moved in other ways that makes capturing images safer for the patients and our technicians.” 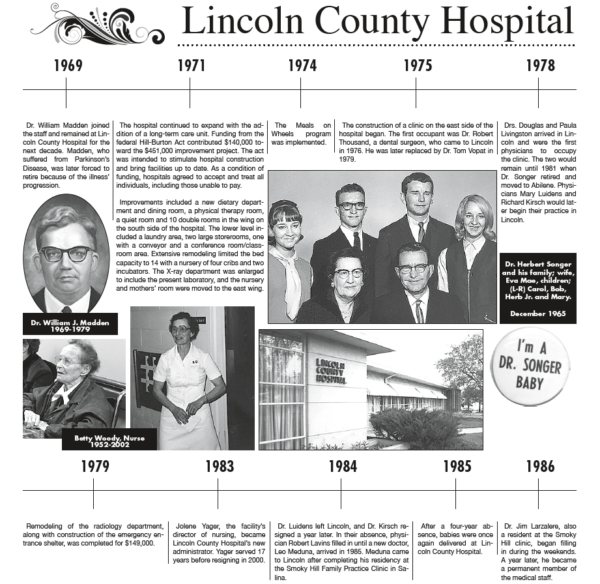 Officials originally earmarked $320,000 for the improvement project. But when the updates were completed, the final costs totaled approximately $278,000 – a savings of $42,000. The hospital  used funds generated from the sale of tax credits to cover project expenses.

In July 2015, the Kansas Department of Commerce announced the hospital was one of 23 nonprofit organizations, to share $4.13 million in tax credits under the Kansas Community Service Tax Credit Program. Of that, LCH received $150,000.

Four major benefactors, including Dr. Barry and Mrs. Jane Murphy, Citizens State Bank, The Bank of Tescott and Bennington State Bank, purchased the tax credits, while the hospital and the Health Care Foundation of Lincoln County and the Lincoln County Hospital Foundation also contributed to the project, he said.

“I think the improvements were very much-needed,” Granzow said. “In my mind, though, it’s more important what our public thinks of the improvements. During our open house on Jan. 17, the comments I received from the people who attended were very positive.”

Like the recent improvements, the construction of the original hospital building was made possible through community support.

The hospital’s origins can be traced back to 1947 – the year when county residents approved a bond election, supporting the construction of a new medical facility in Lincoln County. 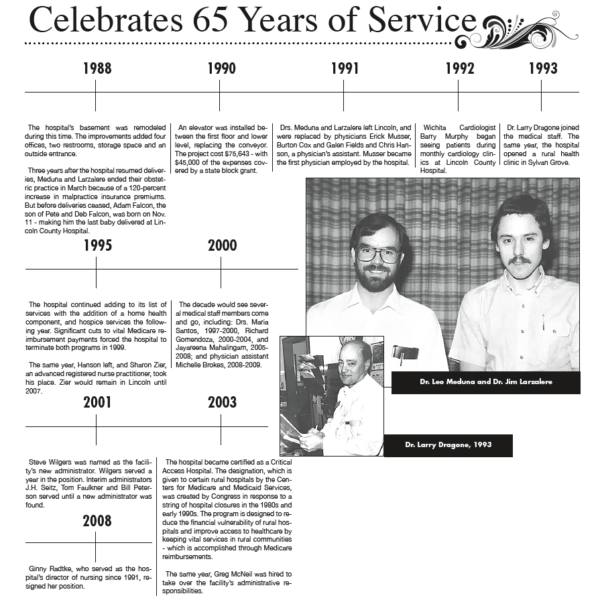 Voters agreed to finance the project by granting permission for county officials to issue $150,000 in bonds. Three years later, the county issued another $25,000 in bonds for construction, and, combined with an estimated $10,000 in cash and gifts from individuals and organizations, work began in October 1950.

According to hospital documents, the medical, surgical and obstetric departments consisted of 20 beds, an operating room, delivery room, an emergenc

“The building and equipment was designed to give comfort to the ill and injured and the latest type equipment purchased to aid in diagnosis,” according to a program distributed at the hospital dedication. “The patient rooms are well-lighted by the full-front windows. The interior is finished with pastel shades of colored plaster.” In a time when other rural Kansas hospitals have been forced to close or consolidate, Granzow said it makes the hospital’s anniversary celebration that much more significant.

“It means we have a very supporting local community that values what we do,” he said. “All of the improvements that have been made over the past 10 years were made possible through the support of the people we serve – the people of Lincoln County.”

As the hospital continues to map out the future of health care in Lincoln County, Granzow said the one thing that won’t change is its commitment to improving the health of local residents. “We will continue to add services that benefit the people we serve,” he said.

The 2020 #LiveLincolnCounty photo contest is now open! Submit your entries before Sunday, Nov 22 at https://www.livelincolncounty.com/photocontest/ Share this Page:

McReynolds family gifts land to County for public park along Saline River The plan for a new public park for picnics, camping and fishing near……

Congratulations to our 2020 #LiveLincolnCounty Photo Contest winners Allison Johnson and Sarah Esposito! See all the winners… Share this Page: