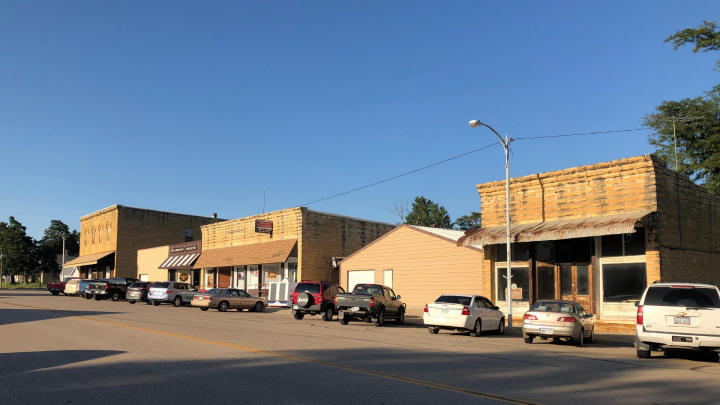 On August 1st, 2020, Sylvan Grove’s downtown commercial district was officially listed in the Register of Historic Kansas Places! Of the 36 properties within the district, 20 of them were built within 1887-1930.

Downtown Lincoln listed in the National Register of Historic Places

Lincoln’s downtown commercial district was officially listed in the National Register of Historic Places on June 1, 2020. The district’s buildings date from between 1881 to 2001 with two-thirds of them being built by or before 1920. 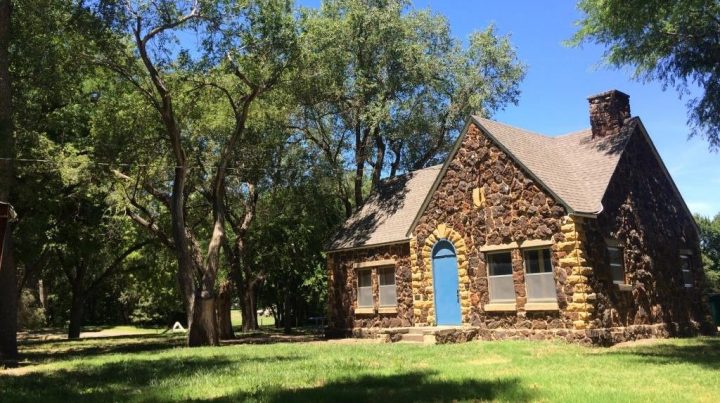 A survey of Lincoln’s City Park has been completed to determine if the area would be eligible for any historic designations that could open up financial resources to the City to help maintain and improve the park. 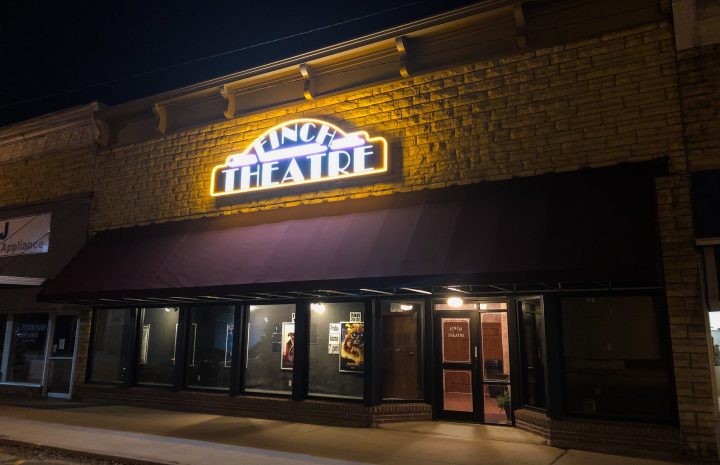 A new lighted sign was installed at the Finch Theatre in Lincoln in January and the new awning was installed in November. This project was made possible by a grant from the Post Rock Community Foundation. 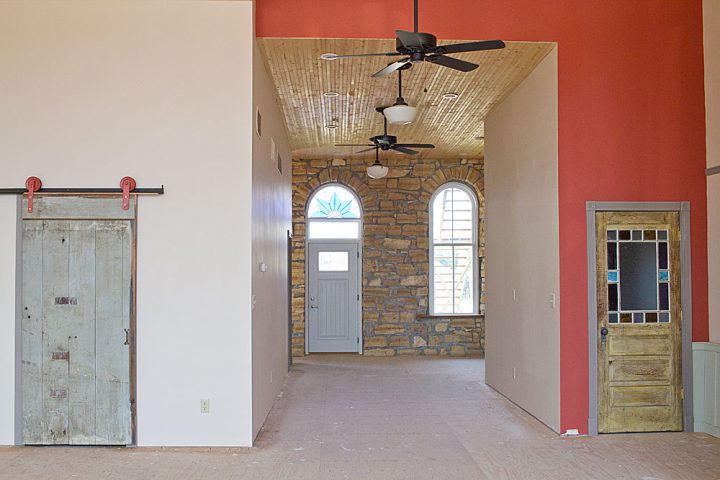 Next door to the historic Cummins Block Building on the corner of Lincoln Avenue and Third street, sits another piece of Lincoln history restored. Craig and Mary Ann Stertz completed four years of restoration work and hosted an Open House in August for the community to see the finished work. (Courtesy photo) 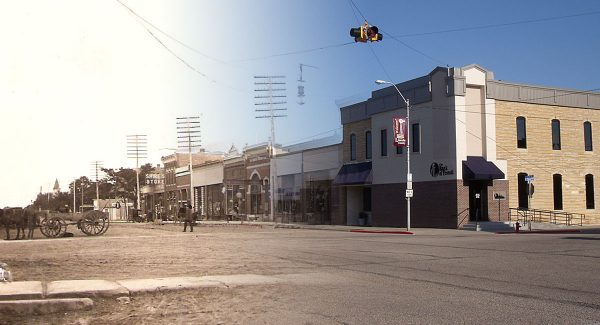 Lincoln County is receiving a Historic Preservation Fund reimbursement grant through the Kansas Historical Society to hopefully gain historic status in various places in the county. A study will be conducted in the Lincoln and Sylvan Grove downtown’s to see if the areas could be eligible for any historic designations. (Photo illustration by Kris Heinze) 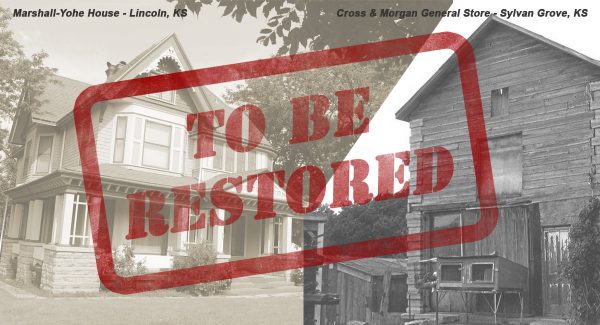 Two historic Lincoln County buildings will receive grant funding from the Heritage Trust Fund of the Kansas Historical Society for structural improvements and preservation. The Marshall-Yohe House in Lincoln and the Cross and Morgan General Store in Sylvan Grove were selected after an application process in late 2017 and recent announcement to receive the funds. (Courtesy photos) 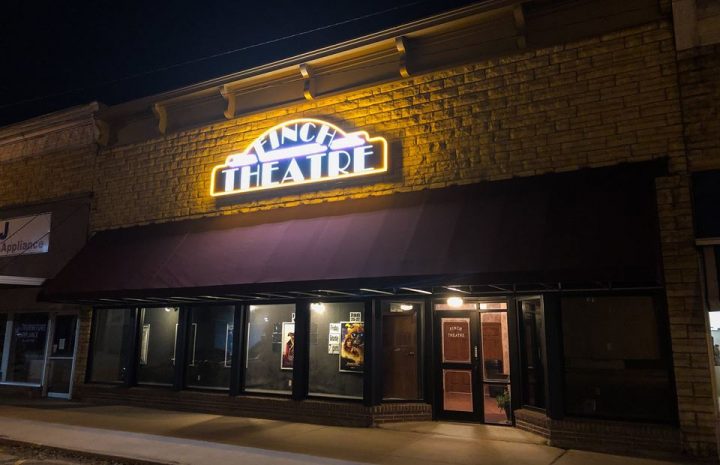 The Finch Theatre: Twenty-five years later, a shining example of volunteerism at its best

In 2017, the Finch Theatre is a community hub, showing the latest movies on the big screen every weekend and hosting a children’s theatre production each summer. The adjacent Community Room is used for everything from dance classes and wedding receptions to community fundraisers and business meetings. This feature takes a look back at the spirit of volunteerism and coming together of all the communities in Lincoln County to renovate and build the Finch Theatre as we know it today. 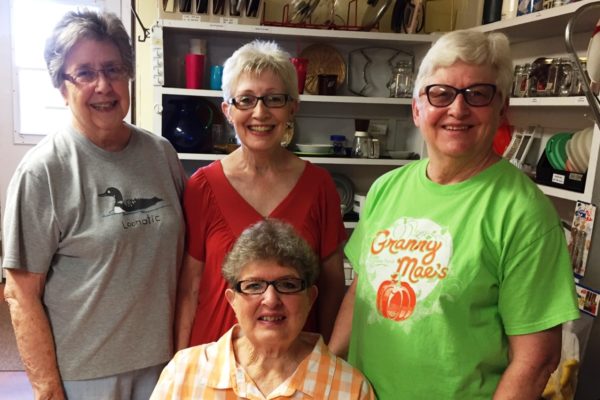 After 50 years, the VFW Auxiliary’s all-volunteer Stop and Shop store is still donating profits back into the community to support local charitable projects and the country’s veterans. | Courtesy Photo 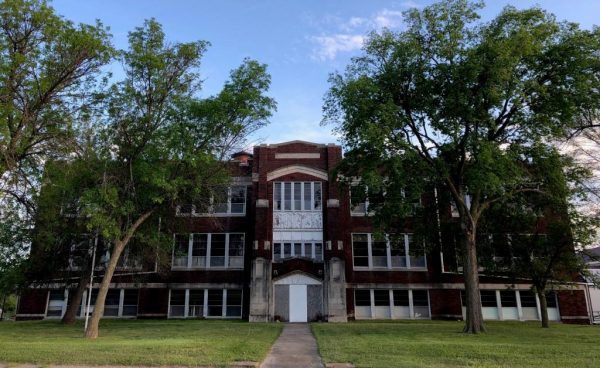 Since 1922, the former Lincoln High School has stood as a cornerstone of the community at the south end of 4th Street. Although it has largely sat vacant since the last class graduated from it in 1996, a group of local citizens organized the 1922 Foundation, a non-profit 501c(3), to purchase the building and work towards redeveloping the building into a new use. 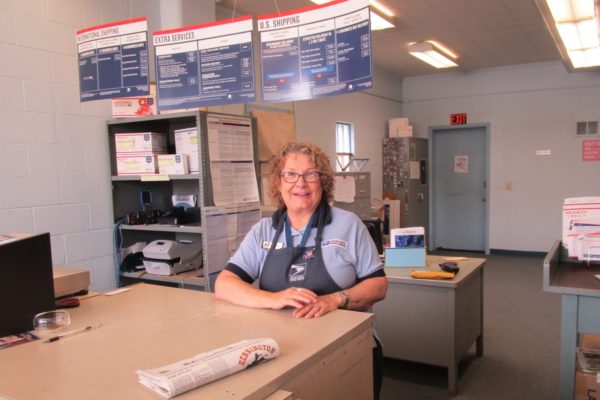 The Barnard Post Office celebrated 135 years since it was established on May 18, 1882. 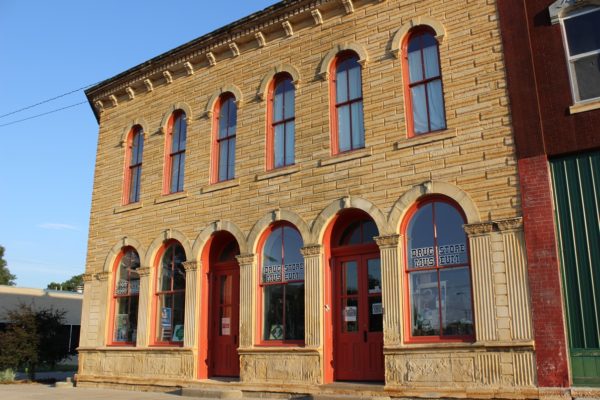 The Kansas Preservation Alliance awarded Jack and Kathie Crispin a 2017 Advocacy Award for Excellence for the rehabilitation of the Cummins Block Building in downtown Lincoln and for their work of promoting and preserving history through their museums. | Photo credit: Kelly Larson 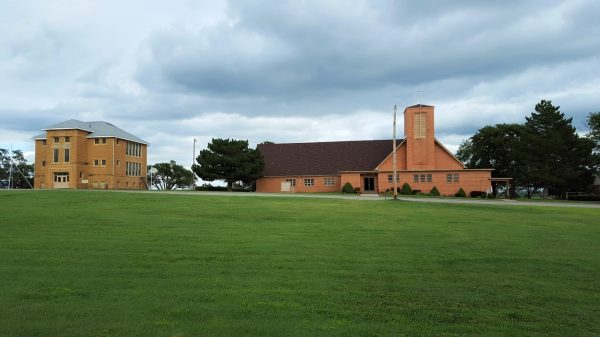 The St. John and Bethlehem Lutheran churches in Lincoln and Sylvan Grove celebrated a milestone as both houses of worship observed their 135th anniversaries with special events and activities. | Photo credit: Tyler Gier 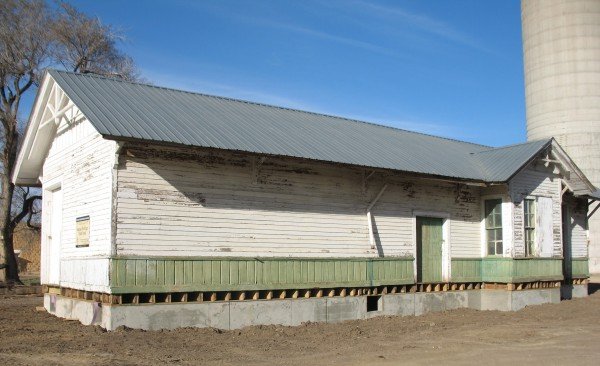 This past month a new concrete foundation was poured for the Sylvan Grove Union Pacific Railroad Depot, replacing the crumbling underpinning supporting the last surviving depot in Lincoln County. 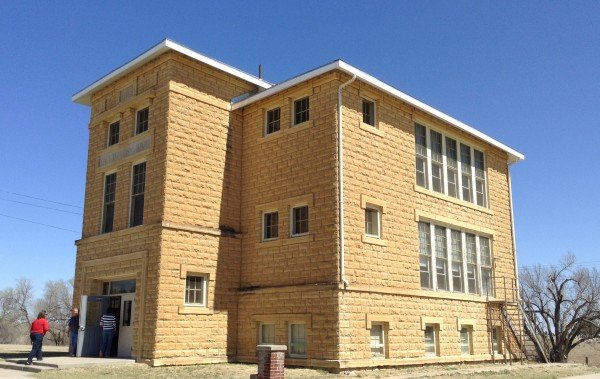 Nearly $10,000 in funding has been awarded to the Evangelical Lutheran School in Sylvan Grove to support portions of a much larger restoration effort | Photo by Kelly Larson 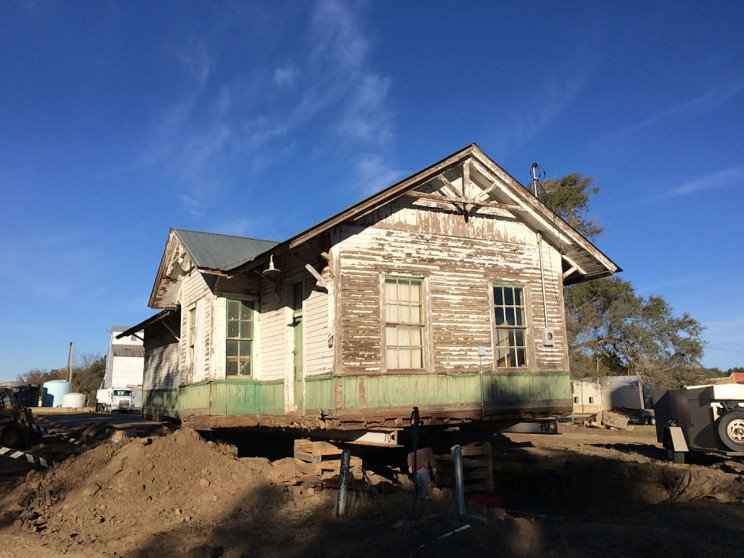 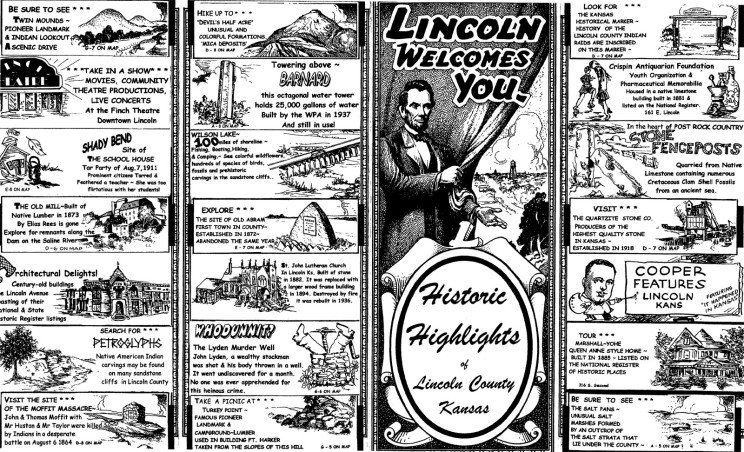 This brochure, printed in 2001 by the Lincoln Art Center, is an adaptation of a 1937 original edition by Frank Arlo Cooper (1904-1968). It includes a hand-drawn map of many historical markers and locations of historical significance in Lincoln County.

In 1870 George Green, the founder of the town of Lincoln, named it after Lincoln County, which had received its name in honor of the President, Abraham Lincoln. A U.S. Census was taken in 1870, and the population was listed at 516. Lincoln then qualified for a separate county, having been a part of Ottawa County until then. They voted for the first time and 155 votes were cast for the location of the county seat in Lincoln.

Lincoln County is the “Post Rock Capital of Kansas”

State of Kansas Senate Resolution No. 1854
A Resolution designating Lincoln County, Kansas, as the “Post Rock Capital of Kansas.” 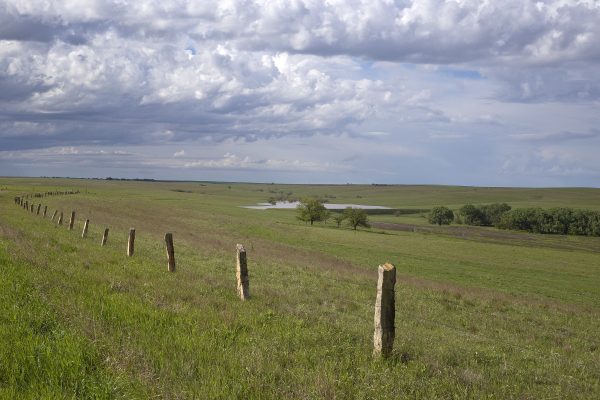 Lincoln County officially became a Kansas county in 1870. Early settlers staking their claims and fencing their property lines needed an affordable material to build their fences. In this area of Kansas, near the soil surface, is a layer of limestone rock that is easily quarried and breaks into manageable chunks. Long lines of Post Rock fence posts are still seen today bordering the pastures.

The area known as “Post Rock Country” stretches for approximately 200 miles from the Nebraska border on the north to Dodge City on the south. The limestone that is found here comes from the uppermost bed of the Greenhorn Formation. It was out of necessity that settlers in the late 1800s began turning back the sod and cutting posts from the layer of rock that lay underneath. By the mid-1880s limestone fence posts were in general use because of the widespread use of barbed wire.